​Define Camera Obscura.
The natural optical phenomenon that occurs when an image of a scene at the other side of a screen (or for instance a wall) is projected through a small hole in that screen as a reversed and inverted image (left to right and upside down) on a surface opposite to the opening.
Explain the steps to create, expose and process a pinhole camera image:
1. paint an altoid container black
2. cut a hole in the cover of the tin
​3. cut a small square of a coke can that will cover the hole in the cover
4. use a small needle to make a hole in the coke can
5. use black electrical tape to keep the coke can in place in the container
6. place the light sensitive paper in the camera with the electrical tape over the hole
7. tape around the box to make a light tight box
How did you create a shutter and aperture on your pinhole camera body?
The shutter is the piece of tape that covered the hole made buy the needle(aperture)
What was the focal length of the cameras?
21.28mm
​Where did you place your camera and what was your exposure time?
I put my camera on the stop sign at the end of Blue Raider Blvd for 7 days
What was the light source for the exposure?
The sun was the light source for the exposure

After taking down your camera and seeing the results, how did the image appear on the light sensitive paper?
The image was upside down and backwards, it was also in red blue and white rather than blue and black.
Explain the steps you took to "process" your pinhole negative with the scanner and Photoshop.
1. we scared our photos onto the computer
2. we inverted it and fixed the levels to make the picture clearer through Photoshop
Finally, what surprised you about your results? If you could re-do the process, what would you do differently to change your results?
What surprised me about the pinhole cameras was how far away the subjects looked. In my picture, the school in the background looks so far away  when in reality its not that far away. 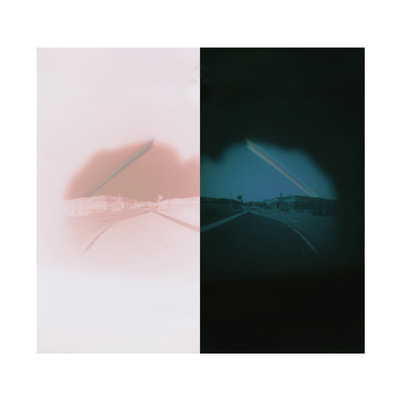 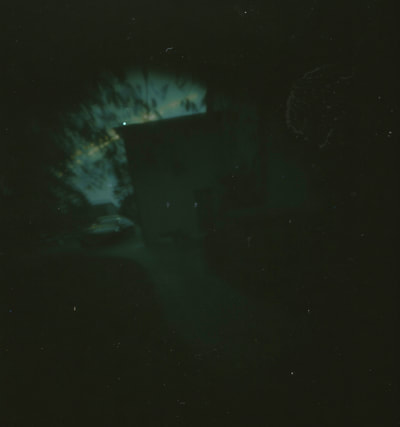 Where did you place the pinhole camera outside of school?
I put my pinhole on a tree at Emily's house.
​How many days did you leave the camera out?
Three days
How did light, weather, location and time impact your results?
It was very dark because the time was short and it was in the shade with not much light in it.
What changes (if any) did you make to modify your camera before taking the second image?
None
Compare your out of school pinhole image to your first in school image:
​The colors are darker because it was outside less time
What is similar and different about the images?
The path of the sun was still there and they were both further away than I expected.
​What is better or worse about the results of either image?
​The one from school is better because it is more clear and brighter so it is easier to see.